July 20, 2016
Today we have largest number independent democratic countries in the history of human civilization. Majority of today’s countries have their own elected government and the representative. Peoples of such countries enjoy their own state’s law.

Human civilization has developed itself from nomadic to democratic states. In past, nations have been governed by authoritarian rules of Kings and their councils. Today, we have people’s elected representatives for governing our nations.

Now the questions arises, are we really lives a independent life in today’s democracy?

For instance, one of the basic privilege of any citizen is of safety. Really think of it. Irrespective of the country develop or under-develop, that the country’s government primary duty towards their citizens is of safety and security. The leaders should work to secure their citizens before them. Is this really what happens in regular governance? I think not. Instead they allocate more and more funds on VVIP’s security. Deploying more security to safeguard government establishments. Just take statistics from any country on how many of the leaders and the common citizens been killed in violence? The numbers of common citizens are far more.

This is just one issues, there are many more, like right of speech and so on. 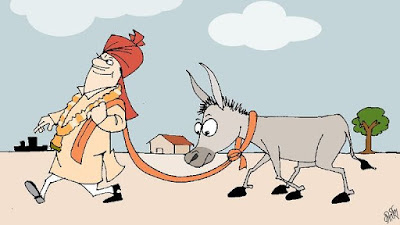 Sometime relation among leaders & their followers looks similar to the above pic.

A question still stands, are today’s democratic systems are flawless? Are they do need to get better?

Probably our democracies will become and function better as we become more civilized.

Independence is stage should be enjoyed by all. To be independent one should be librated from foreign rules and regulations. The basic rule of co-existence should always be honored. One day highest stage of being civilized will be achieved by us. Where everyone will live in peace, harmony, designate their nation’s law and will self impose it.
Social

Popular posts from this blog

December 05, 2011
O ur good health is the greatest blessing of God. When we born, we get a complete good healthy body. There is very few percentage of babies born with some defects or problems. If being health our main objective is to nourish our body, protect it and keep it in best form by time to time maintaining the functions of our body. For maintenance of our body we have to do certain work out, some people do exercise, some take massage and some play games. To strengthening the body steroids are not the solution. For this modern chemical drugs are of no use, for this the best way is to go by Nature. We are also a nature's product and to protect it by keeping our body in fittest form is possible only by Nature Way. Nature is very vast and has lot to give. If we study animals and plants life we can understand, that those living beings are using only natural product for their betterment. They live with the nature and behave according to nature, that's why they doesn't get ill very quick
Read more

For evolution of the human soul It is rightly said that, “an ounce of practice is better than tons of  theory. Here we have mentioned about few suggestions which can cultivate the essence of the Eternal Culture in its purest form. Suggestions are suitable for modern busy householders with fixed hours of work. One can modify them to suits own convenience & increase the period gradually. It is advisable to take in beginning few practicable resolves which form a small but definite advance over ones present habits and character. In case of certain health issues, pressure of work or any unavoidable engagements one can observe minimum for the period. Spiritual Culture It is better to be in bed early at night. One should get up at 4 o’clock in morning. After answering calls of nature like, cleaning mouth and taking bath, etc., practice yogic breathing (Pranayama) and meditation from 5 to 6 o’clock. Morning time is best for yogic breathing and meditation. Meditating in Padma, Siddha o
Read more